From the Spring 2017 issue of Classical Guitar | BY ADAM PERLMUTTER

I’m a bit of an instrument snob, so I didn’t have the highest expectations when I removed the Lucero LC235SCE from its shipping box. At first blush, the guitar, with its cutaway and laminated back and sides, not to mention its East Asian import status, appeared to be a long ways from a fine concert instrument.

But after spending a few minutes with the Lucero, it’s obvious that this a winner in its class. The guitar has a smooth playability and a warm, round voice and sits on top of Lucero’s lineup available exclusively from Guitar Center, Musician’s Friend, and Music & Arts. Together with its nonstandard appearance, the LC235SCE would be an inspiring companion for learning the classical literature—and more.

The LC235SCE is an upgraded version of Lucero’s LC230S, adding a Venetian cutaway, swapping bubinga back and sides for zebrawood, and adding an electronics package by Fishman.

In some key ways, the LC235SCE is traditional. It’s got a solid red cedar top, a 12th-fret neck junction, a slotted headstock, and a 49-millimeter nut. But the zebrawood, cutaway, and electronics all depart from the established template, and the neck’s scale length, 25 3/4-inches, works out to 653 millimeters.

The Lucero is a nice-looking instrument—a marked improvement on the stereotypically staid “budget” option. Its cedar top has a warm red glow, and the zebrawood’s dramatic grains cut a striking figure. An all-wood rosette adds classy detailing, as does the rosewood binding, headstock faceplate, and heel cap.

Overall, the guitar feels solid and well built. Things are clean on the interior surfaces; there are no glue jobs, rough braces, or other evidence of manufacturing shortcuts. Outside, the glossy polyurethane finish is thin and evenly buffed, and the binding work is similarly tidy. The fretwork is also good, though the fret ends could have dressed a little better. 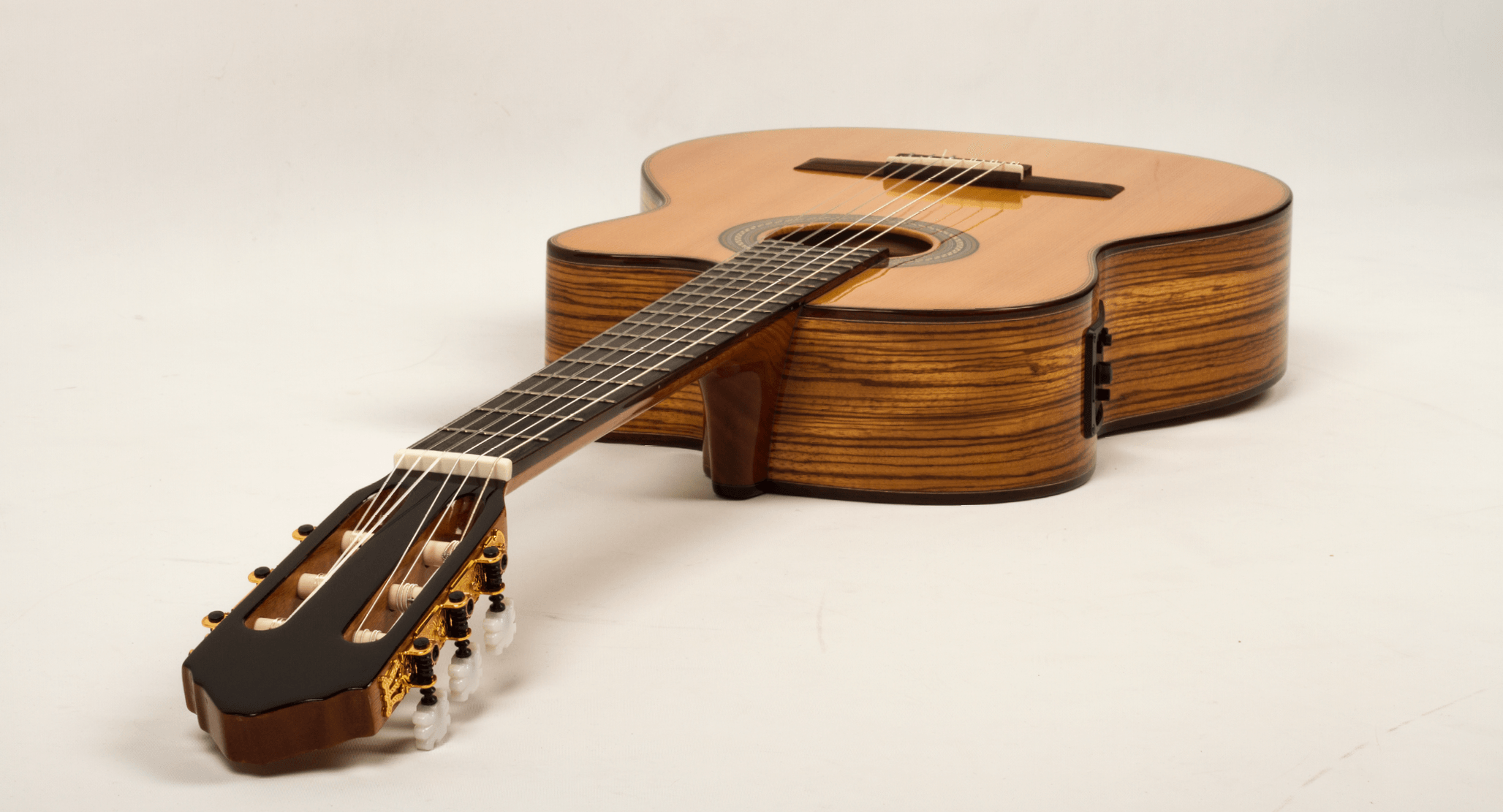 THE FEEL AND SOUND

The LC235SCE was set up at Lucero’s North American headquarters and it’s a breeze to play. The action is low and comfortable on the relatively shallow neck.

For an inexpensive guitar, not to mention one having a cutaway, the LC235SCE has good volume and projection. Its sound is nicely balanced between the registers, with taut bass notes matched by sturdy trebles. I get a hint of fret buzzing when I really dig in on the lower strings, but the guitar’s truss rod will allow you to adjust the neck to suit your playing style.

It feels inspiring to play through studies by Mauro Giuliani and by Matteo Carcassi on the LC235SCE—much more so than on the entry-level instrument I played as a student in the 1980s. The guitar is responsive to fretting- and picking-hands nuances, and its tonal warmth makes these studies feel very musical.

In a different direction, I tried some bossa-nova comping and solo arrangements on the LC235SCE. Thanks to its clarity, complex jazz harmonies sound vibrant on the guitar, and I can clearly hear the individual members of chords. The bass notes in this setting are strong, but not so much that they overwhelm the higher notes, which sound clear and crisp.

Of course, many classical guitarists would be scandalized by using electronics in the concert hall, so the Fishman system on the LC235SCE can be considered a bonus. This package includes an under-saddle Sonicore pickup and a Clásica III preamp, which Fishman designed specifically nylon-string guitars. The Clásica III includes volume, three-band EQ, plus phase (for attenuating feedback) and a built-in tuner.

Plugged into a Fender Acoustasonic combo, the LC235SCE sounds reasonably realistic—again not something you’d use on a student recital, but great for exploring fare outside of the classical literature, and potentially for experimenting with electronic effects like delays and reverbs.

At $399.99, the Lucero LC235SCE costs a fraction of the price of a serious concert instrument, but its smooth playability and attractive sound make it enjoyable to play. All in all, it’s a very nice instrument that will give student guitarists plenty of room to grow and explore.